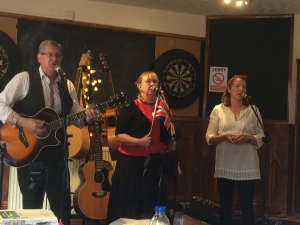 Cromer was a blast! Noah’s Cape were there as part of the Folk On The Pier Fringe. This was a special year as the Festival celebrated its 20th Birthday and Headlining the final session was Folk Royalty, Fairport Convention. It’s a great gathering of Folk talent and music pours out of various pubs and community halls as well as at the Pier Theatre which is the focal point of the Festival.

We had a great time performing and the seaside location added a sense of holiday freedom. Linda was the resident host at the White Horse Inn for the weekend cranking out two great solo sets as well as joining Noah’s Cape as we kicked off the White Horse’s Saturday programme. There were some great weekend Fringe sessions including the amazing Stompin’ Dave Allen who tap dances in rhythm as he plays ands sings.

We also enjoyed Fish ‘n’ Chips, Ice Cream and walks along the sea front. During one such walk, the first line from a comic monologue from Stanley Holloway came to Mark’s mind and he wrote a poem based on “The Lion and Albert” It was written by Marriott Edgar, and his Dad used to perform his monologues as his party piece, so they’re one of his earliest poetic influences. The poem is below.

We hope to see you there.

There’s a famous seaside place called Cromer
That’s noted for fresh air and fun.
So Mr and Mrs Ramsbottom
Went there with young Albert their son.

Now t’family had heard about seasides,
All tacky and Kiss Me Quick hats.
There’s was nowt to eat but cheap burgers
And the shops were all full of tat.

Mother said ‘Let’s look in the shops’
Pa and Albert let out a sigh!
When she started eying winter weight nightshirts
Pa said I’m hungry, let’s have a pint and a pie.

So, seeking for proper amusement,
In the White Horse they listened to some Folk
And were utterly bewitched by the music
The friendliness, banter and jokes.

The whole town was taken over by Folk Music
A veritable traditional sound scape.
They found they had a new passion,
Their favourite of course were Noah’s Cape!

So, the next time you find yourself in Cromer
Admiring the view, crystal clear.
If you’re in need of further amusement
Peer at the folk, playing Folk on the Pier.

Noah’s Cape head east to Cromer in Norfolk this weekend for the Wondrous Festival and Fringe that is Folk on the Pier.

Linda will be in residence at the White Horse for the weekend taking on her customary role as the Compere beyond compare, introducing a wide variety of acts as well as delivering some solo sets too.

Noah’s Cape kick off the fun on Saturday at high noon in the White Horse and if you’re in the area, we’d love to see you.  We’re looking forward to fun, folk and fish ‘n’ chips.

There’s a stellar line up at the main event all weekend and some of us may well be terrorising some of the open mics on offer.

Whatever you’re up to, have a great weekend! 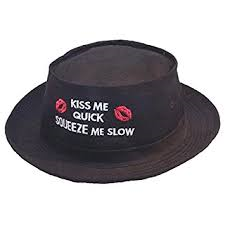 It’s been rehearsal day for Noah’s Cape (Linda, Marian and Mark) That means lots of music and mugs of tea! The intensity of each rehearsal depends on the proximity of our next gig, and whether we’re learning new material or simply refreshing items in our current songbook.

Now Mark is up to speed with a lot of Noah’s Cape’s back catalogue, the pace is a little more relaxed and today was a chilled catch up and debrief following our performance last week in Stockton. We’ve received some lovely feedback and we’re now looking forward to Cromer where we’re playing on Saturday 12 May at 12pm at the White Horse Inn as part of the Folk On The Pier Fringe. (See their website for details of the Main and Fringe programme).

We decided to refresh several songs as some lyrics tend to stick in your mind easier than others. We also try to have a wide variety of arrangements with different moods, tones and instruments. Sometimes, we’ve been enjoying the song or the lead singer so much, we simply get lost in the music and forget it’s our time to play or sing harmony and we’ve been tightening those things up. As Linda reminded us, we’ve only been playing together for four months and we’ve come a long way in a short time.

We then followed that up with work on a new song we’re hoping to add to our repertoire. These are the hard yards that must be run in order to find the right instrumentation and vocals that work together. We’re nearly there with this one but you never know until a song is played to an audience. We all have homework to do and we’ll see how we did next week!

Speaking of which, we hope you all have a great week : )

We very much enjoyed playing our headline set at the Stockton Folk Club in Warwickshire this week. The audience were lovely, receptive and responsive. The audience comments were positive and they seemed to appreciate our mix of original and traditional songs and Mark’s funny poems.